According to recent findings, people all over the world are becoming increasingly accepting of self-driving cars. Self-driving cars are driverless vehicles that are capable of navigating the roads without human intervention. They’re also known as driverless cars, autonomous cars or robotic cars.

Most countries do not allow the use of self-driving cars yet as this technology is still in its developmental stages. The bottom line, however, is that for these cars to be a success, they should be able to gauge the environment they function in with the help of advanced GPS systems, laser lights, computer vision, and so on. 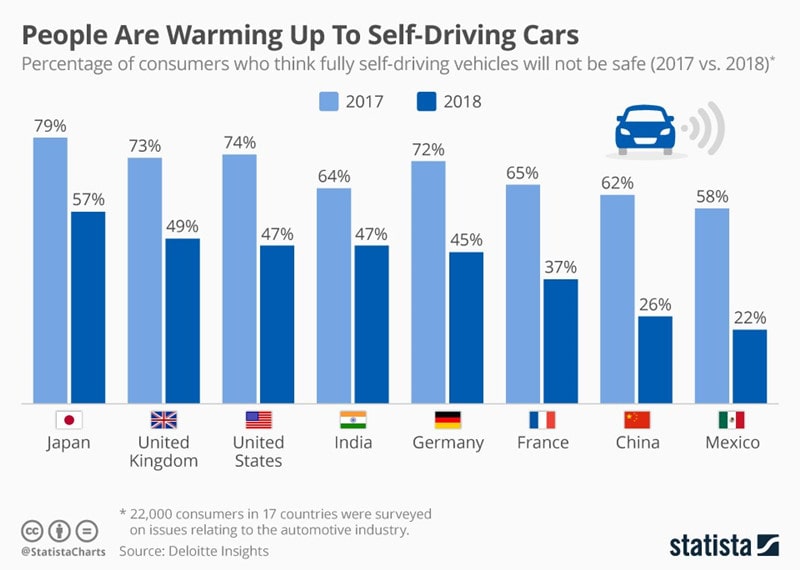 In order to reach a particular destination, a self-driving car needs to know the route, understand its surrounding elements, follow traffic rules, and interact prudently with other vehicles and pedestrians on the road. The following technologies can help these cars gather and analyze data to navigate the roadways safely:

• Camera: for a clear view of streets and traffic lights.

• Radar: for detecting large objects around the vehicle and regulate their distance.

• Lidar: for better sensing smaller objects near the car and mapping 3D elements.

• Artificial Intelligence: for making all the important decisions to understand the route and the navigation by combining the car’s camera and sensor capabilities.

Now that you know the basics of self-driving cars, let’s have a look at some exciting details about them.

While it may seem obvious that a car that doesn’t need a driver would come without a steering wheel, the majority of people continue to be startled by this fact. Want to know what else these cars come without? The answer is pedals.

If you’re looking for a reason behind this, it’s simply because you may not need them. Instead, this car offers ample space to allow manufacturers to include other features.

The typical driverless car has two seats with seatbelts, space for storing passenger’s belongings, start and stop buttons, and a screen that displays the route to be followed.

Self-driving cars allow users to summon them remotely from parking lots or any other location with the set destination with the help of a smartphone. This feature will probably be one of the most exciting things about using driverless cars.

3. Its GPS Is Something Else

Driverless cars depend on GPS and satellite navigation systems to follow the set route. They also harness cameras, lasers, and radar sensors to drop you off safely on the sidewalk (rather than strand you in the middle of a bustling street) to avoid accidents and other hazards.

Self-driving cars are capable of distinguishing between a pedestrian, a car, a bicyclist, a curb, traffic lights, as well as roadway construction and road markings. They are also smart enough to view distances of up to 600 feet.

4. Self-Driving Cars Can Absorb Impact to Prevent Injury to Humans

One of the most common concerns pertaining to self-driving cars relates to their safety. However, that’s actually an advantage that these cars offer. In fact, they are safer than human-driven vehicles.

Car manufacturers are ensuring that even if a car does collide with something, the damage caused is minimal to nil. These cars use a foam bumper and a flexible windscreen. So, if a human is hit by them (inside or outside), the car will be able to absorb the resulting impact instead of overwhelming the person.

5. Self-Driving Cars Can Improve Your Driving

As per an announcement made by NVIDIA Corporation, the leading driverless car technology maker, its new AI-powered co-pilot system employs external cameras and radar to inform users about the car’s surroundings. This can include information about other cars and humans. The internal cameras enable users to track where they’re going.

Further, the co-pilot technology can drive the car independently most of the time. However, it also uses its data to show humans how they can drive better when they’re behind the wheel of a regular car.

6. They Can See Clearly Even in Darkness

Did you know Ford’s self-driving cars can see even in complete darkness without the help of headlights or street lamps?

According to Ford, its driverless cars went 60 mph around curved roads that had no light whatsoever. This is good news for the automobile manufacturer that plans to release fully autonomous vehicles with Level 4 autonomy (zero driver interaction) by 2021.

It is commonly believed that self-driving cars operate at slow speeds in order to ensure a cautious and safe drive. However, this isn’t always true. Take the example of Audi. It equipped one of its RS7 Sportback with technology that enabled the car to run without a driver. This car made it to the Formula 1 track at Hockenheim and was only ten seconds slower than professional human drivers in the same car. It also touched the speed of 150 mph.

While self-driving cars are leaving people around the world impressed, they’re also raising questions pertaining to law and morality. Questions such as who will be held accountable in cases of crashes or accidents or how the cars can be programmed to protect the driver or take action to minimize damage to the public abound. It is important that these considerations are tackled in the early stages of the creation and adoption of autonomous cars.

While self-driving cars are arousing both, curiosity and skepticism, it has become increasingly obvious that there is no stopping this technology. Further, once it arrives, it’ll probably stay. Responsible entities such as automobile manufacturers, technology firms, and governments are looking forward to bringing these high-tech vehicles to the masses.

Meanwhile, people are likely to base their decision on the tech and safety innovations applicable to self-driving cars over the next few years. All said and done, these vehicles are sure to drive themselves to a bright future!